Remember You Will Die (It Helps You to be Alive) 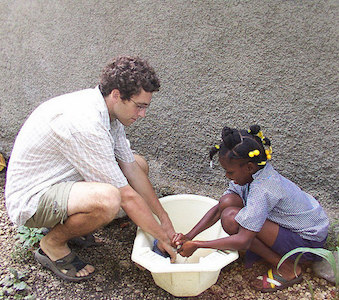 Just before the earthquake, Père, the grandfather of the Woshdlo family I first lived with in Haiti, pulled me aside to tell me about the latest project he was starting. As usual he was barefoot, in tattered slacks and a partly shredded button-down shirt that he wears for work in his fields.

He said he had been saving up to make a burial place — a small, traditional concrete tomb. The time was coming closer, he said, and he wanted to prepare for his death so the costs didn’t fall to his children.

When I was there after the earthquake, I saw the big, square hole in the ground (maybe ten feet by ten feet, and about six feet deep) about twenty paces from his home.

It reminded me of two snippets I heard and extrapolated about different monasteries:

At a secluded countryside monastery, every monk — as a ritual each morning — goes in the early dawn hours to the brothers’ cemetery. On arrival, each one grabs from the shed the rough wooden handle of a shovel. Then walks over to sink that shovel a single time into his own predesignated grave.

The first days it’s as though they’re not making a difference at all. A newly installed brother might get only a loose, light shovelful of grass and topsoil. The wind blows dirt and leaves to cover the first digs of mortality. But some weeks in, the faint form of a grave takes shape, a hole shaped for a body, for the digger’s body. But still only inches deep.

Eventually, decades into their life and work, senior monks (sometimes with the help of a younger brother) climb gingerly down a ladder into the grave and dump a shovelful of the dark, moist, heavy dirt into a bucket, which is then hoisted up the ladder before the monk slowly, rung by rung, emerges from the hole that he will one day descend into without coming back up.

More vocal and less physical (and less practical), at another monastery monks greet each other, whenever they pass and it is not an hour of silence, with the phrase, “Memento mori.” Remember you will die.

It serves the same purpose as the shovel. I’d find it less helpful as a ritual to reflect on life and death. But it might be a more effective spiritual discipline for living: Can you imagine how hard it would be on some days to not say “Memento mori” with secret satisfaction to a particularly annoying colleague?

Each Ash Wednesday, if you go to a church that does this sort of thing, a version of memento mori happens when you go to your knees and a cross of ashes is marked on your forehead as you hear the words, “Remember that you are dust and to dust you will return.”

The curse is on skin and bones, but so too comes the blessing.

This is an excerpt from After Shock: Searching for Honest Faith When Your World Is Shaken