Chaos and Grace in the Slums of the Earth 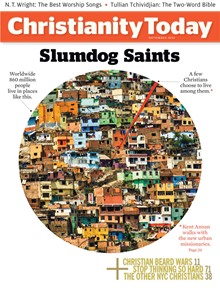 Note: In March I traveled to Bangkok to write about the “slums of the earth” for Christianity Today. This month, that story is their cover. Here is a small excerpt from it:

For the first time in history, one of every two people lives in a city. Some 860 million of these city-dwellers reside in slums—uncertain, cramped, and frequently cruel. Most are there by necessity.

A small number of Christian missionaries live in slums too. They are there by choice.

About 100 of them, mostly from the United States, New Zealand, and Australia, met near Bangkok this past April. They gathered under the banner of “New Friars.”

The New Friars don’t seem to merit high-profile attention. Their efforts to alleviate poverty are small next to the work of many missionary and nonprofit groups and the problems they address.

Yet we do well to listen to the New Friars, because of the way they themselves are listening to God and neighbor, to suffering and hope on the crowded margins of society. They address vital questions about missions today, and about how all Christians might practice our vocations with sacrifice, devotion, and hope.

Read the entire story over at ChristianityToday.com